Start a Wiki
Izumi Ishiguro (石黒 泉 Ishiguro Izumi) is a school friend/crush of Yukio "Koyuki" Tanaka in the beginning of the series.

In a way, Izumi is the polar opposite of Maho Minami; she's rather sweet and kind to Yukio "Koyuki" Tanaka for the most part. She deeply cares about Koyuki as they were childhood friends and thus gains feelings for him when she starts to see him grow into a more confident person.

Izumi is introduced early in the series when she invites Yukio "Koyuki" Tanaka to go bowling with her and a couple of friends. They later meet up with Kayo and eat at a bar where they're confronted by three jacked American dudes who are pissed off about the vandalism of their car. One of the crew is accused,and Koyuki tries to stand up for his friends by insulting the intelligence of one of the men. About to be pummeled, Koyuki catches a break when Ryusuke "Ray" Minami shows up and tries to prove their innocence.

Unconvinced, the three men try to attack Ryusuke, where they then follow him into an alley and Ryusuke pulls a gun out. Izumi and her friends then decide to eat at a nearby restaurant, but Koyuki is concerned about Ryusuke and decides to go look for him (much to Izumi's chagrin). They stumble upon a battered and bruised Ryusuke, who thought that "they were too drunk to notice" that he had a fake gun. Izumi and Koyuki then go searching for Ryusuke's place using the address that he wrote out. On the way, Izumi introduces Koyuki to Dying Breed. When they finally find Ryusuke's house, Koyuki is lent a guitar and Izumi has a conversation with Ryusuke about music (apparently infatuated with him).

Izumi doesn't make too many big appearances until later in the series, where she invites Koyuki to go swimming with her on the night of the festival at the school pool. It is there that she confesses her feelings to Koyuki, even though shes realizes that she's "already too late". Maho Minami then sees them together after searching for Koyuki and immediately assumes that Koyuki has found someone else, running away in tears at the thought. Seeing that Koyuki is in dismay worrying about Maho, Izumi decides to find Maho and clear things up about the situation. Izumi moves on and leaves Koyuki alone with Maho so they can find happiness together.

Although Izumi has feelings for Koyuki, she realizes that he truly loves Maho Minami and steps away, feeling that it would be best for the both of them. 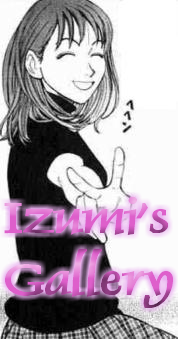 Retrieved from "https://beck-mcs.fandom.com/wiki/Izumi_Ishiguro?oldid=6595"
Community content is available under CC-BY-SA unless otherwise noted.