Start a Wiki
Ryusuke Minami, sometimes referred to as "Ray", is a slacker, but incredibly talented guitarist, he inspires Koyuki to begin playing guitar. He is the lead guitarist of BECK as well as its founding member. A large amount of the story revolves around him and his Gibson Les Paul guitar, named Prudence (Lucille in the original version, which is the same name of B.B. King's famous black Gibson), that has a somewhat dark history.

Stylistically, he is extremely blues based, and seen playing fingerstyle and electric slide in the manga.

Ryusuke is a slacker, who doesn't go out of his way to do anything productive unless it involves music. However, he is very competitive and often makes impossible bets that he would never be able to fulfill if he loses. He sticks up for whatever is important to him, which often gets him in trouble. He has many flaws, such as drinking, girls, and stealing. Even though Ryusuke usually causes trouble for the band, it is his talent which gives the band its uniqueness.

Ryusuke first appears when he introduces himself to Koyuki after he helps him with catching Beck, his dog. Ryusuke gives Koyuki a bandage after Beck bites him and leaves. Later, Ryusuke runs into Koyuki again when Koyuki and his friends are being accused of vandalizing a car. Ryusuke, seeing that the car owners are drunk Americans and that Koyuki and his friends are being accused unfairly, quickly comes to their rescue. He tells Koyuki to get out of there and keeps the drunks at bay with a fake gun. However, his trick is discovered and he gets beaten up. Koyuki and Izumi come back to check on him and Ryusuke starts a conversation with them. He discovers that he and Izumi have a lot in common and invites them to his house. Ryusuke shows off his music collection at his house, which is at a fishing pond. He invites Izumi back, and she and Koyuki both return to visit. He invites them to a gig he's playing with his band, Cereal Momma. Eiji is the band's leader and Ryusuke and Eiji are seen fighting behind the scenes before the performance. It's said that they do this quite often, but always pull it together before the performance. There's a scout coming out to watch the band that night, but the speakers malfunction and the performance bombs. Eiji and Ryusuke have an argument. They decide to continue in different directions and both of them swear to create the greatest band ever. Ryusuke spots Koyuki and takes him along to a live show. Ryusuke tells Koyuki to pay special attention to the bassist, Taira. After the show, they meet up with Ryusuke's sister, Maho. Maho recognizes Koyuki from their previous encounter. Ryusuke leaves Koyuki and Maho to get something to eat together. Ryusuke takes Taira out to dinner and asks him to join his new band. Taira tells Ryusuke that Eiji also wants him to join his band. Taira tells Ryusuke he must first find a vocalist as he is serious about his future career in music. Koyuki and Izumi head off to go see Ryusuke. When they reach Ryusuke's home, they find him practicing baseball. Ryusuke tells them that he is practicing for a Sunday baseball game. Ryusuke gives Koyuki an old guitar of his to practice on. Ryusuke plays a tune on the guitar to show Koyuki that it sounds good. Koyuki is impressed by his playing. On Sunday, Ryusuke, Koyuki, and Izumi arrive late to the baseball game. The pitcher for the opposing team is a well known singer, Manabu Miyazawa. Ryusuke thinks that if he can get him to join his band, Taira will join the band as well. However, Eiji is there and is also trying to recruit Manabu. Mitchan, the person who asked for Ryusuke to play, comes over and tells Ryusuke off for being late. Because of Ryusuke, he had to call in Chiba. Ryusuke hides when he sees Chiba, as he owes Chiba money. Chiba still spots him and chases him with his baseball bat. While Chiba is at the plate, Kayo talks to Ryusuke about recruiting Chiba as his band's singer. Maho suggests that Koyuki should be the singer for Ryusuke's band. Izumi quickly supports Maho's suggestion. Koyuki is shocked, but Ryusuke is willing to audition both Koyuki and Chiba. Koyuki comes over to Ryusuke's house and he invites Koyuki in and wants to have Koyuki practice singing, but Koyuki interrupts him to confess that he broke his guitar. When Ryusuke hears this, he tells Koyuki to leave and never come back. Izumi tries to get Ryusuke to forgive Koyuki. Ryusuke, Chiba, Izumi, and Kayo go to one of Taira's band's shows to watch him perform. They are all surprised when Manabu comes onto the stage and begins performing with Taira and his band. Izumi points out the Eiji is there and Ryusuke comes to the conclusion that this is part of Eiji's plan to get Taira in his band.Chiba agrees to join Ryusuke's band as the singer, as long as Ryusuke promises to hook him up with 'a healthy looking girl'. Ryusuke introduces Chiba to two 'healthy' girls. Chiba tells him that he has no grasp of the meaning of 'healthy'. Later on, Izumi and Kayo go through Chiba's cd collection and ask the boys what the name of their band is going to be. Ryusuke writes down a list of possible names that all include his own name in them. Chiba doesn't approve, but upon spotting Beck, states that the band should be called BECK as a temporary name.

Ryusuke founded BECK and pushed them to perform at many big events. However, he also has a problem with offending big producers and making bets that Beck can't always win. He occasionly over expects his comrades and this leads to fights and temporary rifts between the band. Towards the end of the manga, he starts playing a less vocal role for the band, but his music is still the thing that holds all the songs together. 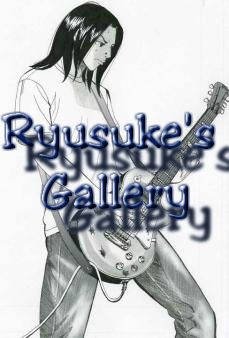 Add a photo to this gallery
Retrieved from "https://beck-mcs.fandom.com/wiki/Ryusuke_%22Ray%22_Minami?oldid=6609"
Community content is available under CC-BY-SA unless otherwise noted.